Arduino: Build and Hack the Planet

Learn electronics, programming, and hacking with an Arduino board - people and schools without a board can work over the web!

A new kind of technology is here. It's open source, but not just software for computers. It's open hardware, and it can go wherever you go, to do whatever its builders and programmers design.

The Arduino is a great introduction to this world. You should get one. Want to try it out first? The course will livestream a built project for you to program over the web.

- you build things and want to make them smart like robots
- you are a student, artist, or teacher interested in science and technology
- you can code but want to try building things in real life

How does electricty work?  Despite tons of examples in nature - such as lightning, electric eels, and static electricity - it took thousands of years for humans to start writing out defensible answers to that question.

Consider how water flows from a higher location to a lower location. We can put this flow to work through a water wheel.  When water falls it collects energy from gravity, which we then can convert into rotation of a wheel.  Similarly, we now know that electricity is the flow of electrons from a high-energy state to a low-energy state.  In between, we can make the electrons do work, lighting up bulbs and turning motor shafts.  The analogy is so useful, that the flow of electrons is called an electrical current.  Ben Franklin observed that electricity was trying to move from one charged state to another, so he named one positive and the other negative.  Franklin and his contemporaries decided that current flowed from the positive terminal to the negative terminal.  Unfortunately, electrons actually travel in the opposite direction!  This is more than a little frustrating.  You now understand this comic.

Consider this circuit but don't build this.  You could burn out the bulb.  A battery has a positive terminal and negative terminal.  When we wire one up to a light bulb, as shown above, electrons flow across and light the filament as they travel.  They then go back to the battery.  This round-trip is known as a circuit.  Note that the bulb must consume energy from the electrons, so if you were to remove the battery or use one with insufficient charge, it would fail to power the bulb.

The light-emitting diodes (LEDs) we will be using in this class work differently, and electricity can only flow across them in one direction.  Also, it would be a bad idea to wire up your LEDs like the bulb shown above - it could burn out!    Include a resistor, a material that inconveniences electrons and reduces their flow.  It looks like this:

Put a resistor in the circuit, somewhere between the bulb and either end of the battery, so that the electrons will be forced to pass through it in their path around the circuit.  LEDs only light up in one direction, so turn it around if it is not lighting up.

On the Arduino, you can use the 5V pin as the positive end and a GND pin as the negative end of your battery.  Remember to add the resistor! 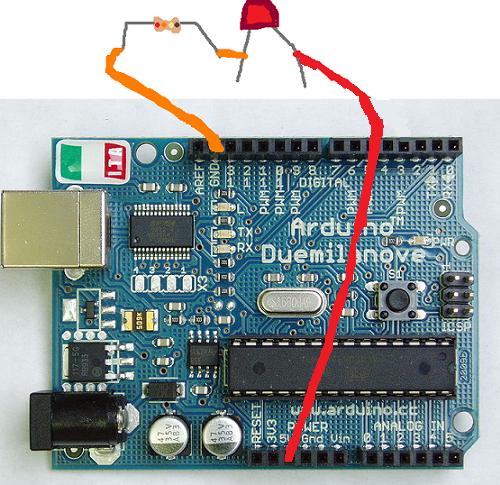 The breadboard was devised to make circuits easy to build, test, take apart, and re-build.  There are three main parts of the breadboard labeled A, B, and C in this diagram: 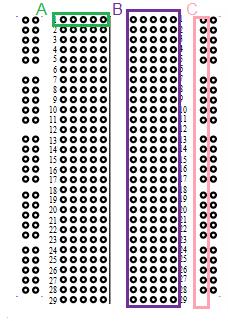 - Part B is a column of rows.  Each row is its own island, so I can put several different connections along the same column.

- Part C is a side column which is connected inside the breadboard.  These two columns are often connected to the most common voltages, HIGH (in our case, 5V) and LOW (in our case, 0V or ground).  This lets us use these voltages for multiple circuits without reconnecting to the board every time.