Getting Started with Scilab

Scilab is an open source software for numerical computations. Its strengths are its built-in matrix data handling capability, rich set of matrix operators and functions, interactive console to quickly get started, built-in programming language, data visualization through 2D and 3D graphs and a rich set of toolboxes for variuos applications.

It is similar to Matlab and GNU Octave, but its programming language is not compatible with them. This course is intended for beginners with no previous experience with Scilab. It will cover the basic interactive use of Scilab and writing Scilab functions.

In this session you will learn the following:

In this session, we will learn the following functions:

Scilab is a data plotter, that is, it plots graphs from the data you input. This is in contrast to function plotting programs (such as gnuplot) which plot graphs of functions without the user having to first explicitly generate the data required to plot the graph. Function plotting programs will decide the range of the values of independent variable and its data interval, generate the data on the fly and plot the graph.

Let us plot a graph of sin(x) and cos(x) over the range x = 0 to 2 pi. We will first create vector x, containing the values of the independent variable x. Then we will create the matrix y, containing the same number of rows as x, with values of sin(x) in its first column and values of cos(x) in its second column.

This must result in the following graph being plotted:

Let  me explain how this was achieved:

In the same way, we could define a legend with the legend() function as follows:

First argument to legend() is an array of strings containing the legend text and the second argument specifies the position. Use the online help to learn more about the legend() function.

While 2D graphs are lines, 3D graphs are surfaces. To plot 3D graphs, we need (x, y, z) coordinates of points lying on the surface. There are two ways in which 3D graphs can be plotted in Scilab: 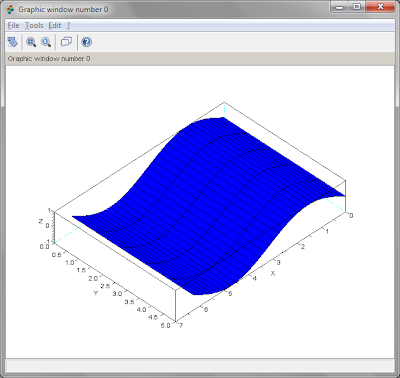 Function plot3d1() is similar to function plot3d(), except that it produces a colour level plot of the surface, using the same colour for points with same height (or for points lying within a certain range of height).

Function plot3d2() generates surfaces using facets rather than grids. Here, the arguments to the function, namely, x, y and z are two dimensional matrices. The surface is composed of four sided polygons, with the x coordinate of the polygon stored in x(i, j), x(i+1, j), x(i, j+1) and x(i+1, j+1). Similarly, the y and z coordinates of the polygons are stored in the y and z matrices. 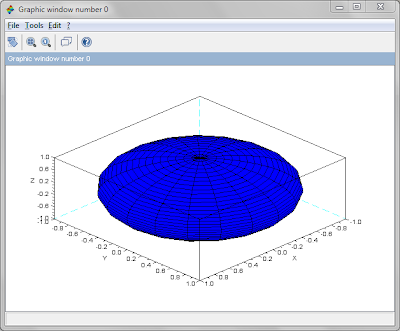 Function subplot() is used to plot multiple graphs within one graphics window. Thesubplot() command must immediately precede a plotting command in order to produce a sub-plot. The subplot() function logically divides the graphic window into an array of rows and columns, and chooses one of the cells as the output of the subsequent plotting command. For example, subplot(235) divides the window into two rows and 3 columns (that is 6 cells in all). Cells are counted in sequence starting from top left proceeding to the right first and then down. Therefore cell 5 in the above command implies that the output of the next plotting command will be sent to the cell on row 2, column 2. 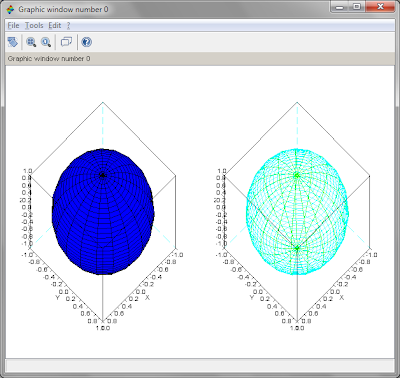 Graphs can be exported to one of the following formats: PNG, PPM, EMF, EPS, FIG, PDF and SVG. To export the contents of the graphics window, go to the main menu of the graphics window and choose File -> Export to (Ctrl+E). This opens a dialog box where you can choose the filename for the image file and its file type. The image cn then be imported into a document.

Scilab can display mathematical equations written in LaTeX or MathML languages. I will demonstrate only the LaTeX capabilities by writing the axis titles of the above sine and cosine function graphs.

Note the x- and y-axis labels with the Greek letter theta and the way sin and cos are rendered. 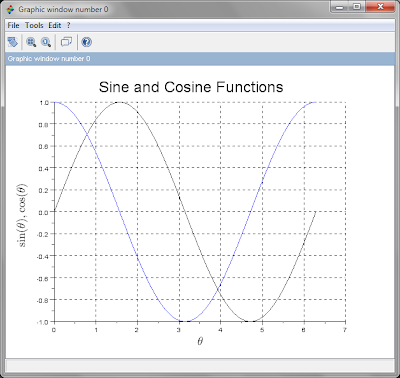